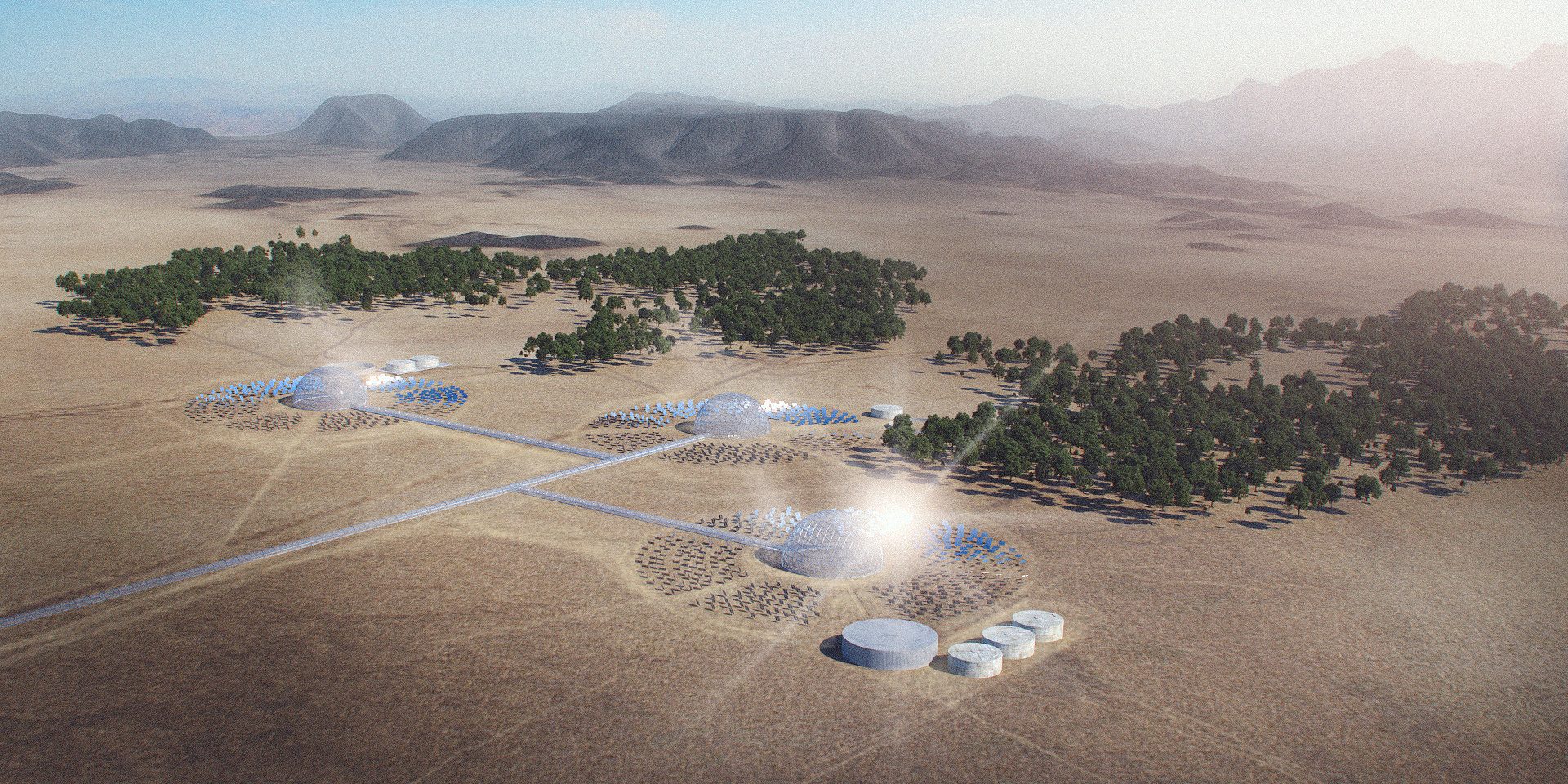 Sustainable desalination on a huge scale is critical  to the future development of desert regions in the  Middle East and the Kingdom of Saudi Arabia  (KSA). A young and innovative British company  believes it has found the answer, and has already  secured a contract to supply its technology to the  new city of NEOM. Founder and Chairman Malcolm  Aw, explains the story of Solar Water Plc, and how  he believes its technology can play a major role in  the region’s economic development.

What can your green technologies do for Saudi  Arabia?

By the beginning of the next decade those of us who can  control, rather than just forecast, the weather will be able  to manage cloud distribution, regional precipitation, and  with it, vegetation density. We will control the  temperature and be able to stop desertification and start  reforestation. A green Saudi Arabia will be built on  humanity’s greatest resource: imagination. At Solar  Water we have an imaginative masterplan, one that is  based on the vital provision of water and trees.

How does the Solar Water process work?  The Group’s carbon neutral hydro-infrastructure draws  seawater inland through glass-enclosed aqueducts to  giant domes where it is boiled and distilled through  evaporation. The energy generated to superheat the  water and create a constant water cycle within the domes  is produced by focusing concentrated solar radiation  from surrounding reflectors. Solar Water Plc’s

technology could be used to produce clean, cheap water for a range of uses including farming, reforestation, biotech consumption, or use by high-tech industries that rely on pure clean water for their manufacturing.

How do you see your technology meeting desalination needs across KSA?

In order for Saudi Arabia (and the wider MENA region) to  become a viable environmentally green commercial  proposition, there has to be an abundance of man-made  rivers and interconnected canals to create the  geographical advantages of a terrain conducive to a  productive and profitable habitability specific to that  region. New urban developments such as NEOM call for  water infrastructure investments that only Solar Water  Plc, and its futuristic climate-reversing technologies,  can encompass.

How will reforestation transform such an arid part  of the world?

Our ability to produce fresh water on a huge scale will  allow the creation of the rivers and canals that are  essential in opening up desert areas. Such waterways are  spheres of economic influence, that give rise to major  sustainable urban developments on their banks, some of  which may become green capital cities. Good harvests,  through massive agro-forestry, means surplus food can  be traded, which in turn helps the development of  trading centres and allows people to think beyond  merely growing food and to turn their attention to ideas  and technology.

What is the advantage of your technology over existing  desalination systems?

Desalination plants to convert seawater into drinking water and water  for agriculture have been used since the 1950s, but at a heavy  environmental cost due to its dependence on oil & gas powered plants.  It has been estimated that the 30 desalination plants in Saudi Arabia  rely on around 300,000 barrels of crude oil each day. Beyond the fuels  involved, there are environmental risks presented by massive discharge  of brine into the oceans, increasing salinity and destroying marine life.  The World Bank has said it is critical that the desalination industry  moves away from reliance on fossil fuels.

Is there sufficient desalination capacity to meet forecast  requirements?

The current output of desalination plants globally is more than 70  million m3 per day, and growing populations and their demands for  higher standards of living mean this figure will need to grow  exponentially to meet future needs. In the Middle East and North Africa,  the gap between demand for water and actual supply is said to be  around 42km3 per year, according to World Bank figures, and expected  to increase five-fold by 2050.

What is the company’s background?

I have enjoyed a long career as an inventor and entrepreneur in many  countries and developed the Solar WaterTM dome and founded Solar  Water Plc in 2016, with the aim of making a real impact in the world  through the provision of fresh water in areas needing it the most. Since  starting the company I have been joined by a great Solar Water team,  such as David Reavley our CEO, Jan Pilkington-Miksa CCO, Beata  Dreger-Smith Director of Business Administration and PR, Prof. Chris  Sansom, Liam Koh and Dr Xavier Tonnellier. We all share the same  passion and vision to help solve chronic water shortages by harnessing  solar power to produce inexhaustible supplies of fresh water in an  environmentally friendly way.

Who are Solar Water’s partners and supporters?  I am delighted to say that Solar Water Plc has three key partnerships to  support its development. The first of these is with Cranfield University,  which is acknowledged to be the leading UK organisation conducting  research and development in Concentrating Solar Power (CSP). Our  second is with British Water, the trade association for British water  companies and organisations, and our third is with the Department for  International Trade (DIT), the UK Government department responsible  for striking and extending trade agreements.

In addition to these partnerships, the company has received funding  from the EU’s Horizon 2020 research and innovation programme, for a

New urban developments such as NEOM call for water infrastructure investments that only Solar Water Plc, and its futuristic climate-reversing technologies, can encompass.

project to develop a prototype seawater desalination dome. It has also  received an official pledge of support from the United Nations  Educational, Scientific and Cultural Organisation (UNESCO) for the  development work it is undertaking in trying to solve the world’s fresh  water shortage.

What is your experience to date in Saudi Arabia?

In March 2019, Solar Water Plc took part in a Renewable Energy Trade  Mission to Saudi Arabia. CEO, David Reavley, supported by the British  Embassy and the DIT, presented the Solar WaterTM solution during a  business roundtable at the Council of Saudi Chambers, as well as at a  networking reception at the British Embassy attended by key business  and governmental stakeholders. This mission was an exciting  opportunity, because the development of renewables and improving  energy efficiency is a key part of the Vision 2030 agenda.

Could you explain your first contract in Saudi Arabia?

On 30 January 2020, NEOM announced that it has chosen Solar Water  Plc to build its first ever ‘solar dome’ desalination plant. Solar Water  Plc’s technology will help the new city of NEOM, located in northwest  Saudi Arabia, work towards one of its aims of revolutionising the  process of water desalination, so solving one of the world’s most  pressing problems, namely access to fresh water. We see this  desalination project serving as a test case for other water scarce  countries that are struggling to generate environmentally safe and  sustainable sources of fresh water.

How will your technology be used at NEOM?

Desalination of seawater from the Red Sea will be the major source  of water supply, using our solar-enhanced greenhouse technology.  Concentrated solar energy from a neighbouring field of large  mirrors that concentrate the sunlight to speed up the natural process  of evaporation within the domed greenhouse structures, which  can be up to 80m in diameter and made up of a heat-conductive  steel structure.

Seawater enters the dome either by gravity or pump. It then evaporates,  while distillation takes place in a separate unit adjacent to the dome.  Once the process is complete, the freshwater is piped by gravity flow  into a system of reservoirs, at which point it can be directed to meet  local needs. It might go to municipal water utilities or everglades of  agricultural wetlands. In principle, it can be used as part of a process  to reverse desertification, using imported top soils for reforestation of  the desert.

You then secured a second contract in the Middle East?

Yes, two weeks after the announcement of our NEOM contract we were  proud to announce that Jordan Phosphate Mines Company (JPMC) has  chosen Solar Water Plc to supply freshwater to its phosphates plant on  the Gulf of Aqaba. For the next 25 years, freshwater will be supplied by  a 40m Solar Waterdesalinator dome, positioned adjacent to the  JPMC plant. Work on the project has begun and we expect the  desalinator to begin supplying freshwater by mid-2021.