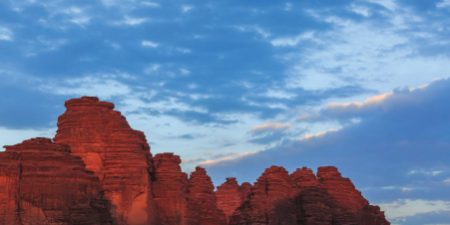 Two years ago, The Environment looked at new solar technologies to power desalination plants in drought-prone countries that have sunshine to spare. Now, the technology is being fitted into a new megacity rising from the Saudi desert. Chris Sansom reports researchers looking since the turn of this century at prospects for solar-powered desalination have struggled to prove that the costs and scale are viable.

Proving this demands large-scale investment, to test whether the concept can deliver in real terms. This year has brought a breakthrough. Solar-powered desalination technologies are being installed at Neom, the US$500 billion (£380 billion) mega-city rising out of the sands in northwest Saudi Arabia, on its Gulf of Aqaba border with Egypt and Jordan.

Neom’s raison d’etre is to deliver the futuristic ambitions of the Saudi heir apparent, crown prince Mohammed bin Salman. MES’ vision is to diversify Saudi Arabia away from its dependence on oil, developing new sectors such as tourism and entertainment.

A project on this scale demands water supplies that can only a combination of technologies can provide. One is cloud seeding, sowing large quantities of small particles of substances such as silver iodide to make clouds produce rain. Cloud seeding was first mooted in the 1940s, but there was no reliable evidence to support it until recently, with new lab experiments to study cloud physics in practice. The idea is eye­catching, but does it make economic sense for large-scale water production?

Another is an internet of water to share real-time information about the efficiency and sustainability of water use in domestic, business and industrial locations. The supply will be drawn from desalinated Red Sea water – and Neom will use UK-based Solar Water’s demonstrating technology, with solar­enhanced greenhouses co-developed and refined by Cranfield University.

Saudi Arabia’s 30 desalination plants get through an estimated 300,000 barrels of crude oil a day. The World Bank says it is “critical” to end desalination’s dependence on dirty fuels

There is nothing new about desalination plants that convert seawater into drinking water and water for agriculture. They have been used in the Middle East and tropical regions since the 1950s. Desalination helps to tackle these countries’ shortages of clean water – but at a heavy environmental cost, as they depend on oil and gas-powered plants. Saudi Arabia’s 30 desalination plants get through an estimated 300,000 barrels of crude oil a day. The World Bank says it is “critical” to end desalination’s dependence on dirty fuels. Moving large quantities of liquids around in oil tankers also presents an environmental risk
– and most desalination plants dump the brine they collect back into oceans, which damages marine ecosystems.

Today, the world’s desalination plants process more than 70 million cu m of water a day. Population growth and higher living standards will increase demand for water exponentially. In the Middle East and North Africa, the World Bank puts the gap between water demand and supply at around 42 cu km a year, and expects the figure to increase five-fold by 2050. The problem is common to other desert regions such as Australia and parts of the US, and to regions in South America and India that have adequate rainfall but whose water supply can become contaminated.

The Solar Water method concentrates solar energy from a neighbouring field of large mirrors, concentrating the sunlight by up to 50 times to speed up the natural process of evaporation in the domed greenhouses up to Som in diameter, made from glass-conductive steel.

Additional solar-collecting heliostats placed in a semi-circular arc around the dome direct yet more solar radiation into the structure. Seawater enters the dome by gravity or is pumped in, where it evaporates. Distillation takes place in a unit adjacent to the dome.

The dome forms the first effect of what is known as a “three-effect”, multi-effect distillation (MED) system. The water is piped by gravity flow into a system of reservoirs that can direct reserves to meet local needs: to municipal water utilities, to everglades of agricultural wetlands or, in principle, to reverse desertification using imported top soils for reforestation of the desert.

The domes provide a large-scale, carbon neutral and sustainable solution. The quality of the water is high enough to suit hi-tech manufacturers that need pure water for their processes. Brine from the seawater sinks to the bottom of the dome’s basin, where it can be extracted and put to commercial use, in lithium batteries, grit for roads, fertiliser or detergents.

Researchers at Cranfield University evaluated the patented technology, building a 1:100 working-scale model to test the productivity, the costs and the most efficient materials for the structure and to store heat within the dome. That led to several refinements to the original concept, separating the evaporation and distillation processes and adding a concentrating solar field to supply most of the heat to the dome.

Neom laid down the plant’s foundations this summer, aiming to complete construction by spring 2021. Cranfield is heavily involved in implementing the design, working with the engineering teams in Saudi Arabia.

Cranfield School of Management anticipates a business value of £40 million for a plant after five years’ operation. The technology has also attracted interest from institutions wanting to install experimental plants in other Middle East countries, Australia, and India.

The relationship between solar energy and water is not always win-win. Interest in concentrating solar power (CSP) technologies to generate energy has
led to rapid development of new sites in hot desert regions around the world, particularly the sun-belt regions of 15-40° latitude. However, CSP demands large and regular amounts of water to remove sand and dust from the solar collecting mirrors and to cool the steam turbines.

And so a typical CSP plant consumes water at a rate of 2,000-3,000 m3 for every gigawatt of electrical power it generates. In the world’s driest regions, water can cost up to €10 (£8.90) per m3, including transportation costs. That can make CSP plants uncompetitive.

Cranfield led the UK research input into a European Union-funded Water Saving for Solar Concentrated Power (Wascop) project. This looked at water scarcity and cost and funded new technologies to cut water use.

One team that has manufacturing, energy and power expertise has been developing practical solutions such as dust barriers and anti-soiling processes to cut water use for mirror cleaning. Another has studied the potential for dry cooling the steam turbine and storage and release mechanisms for waste heat.

The technologies were tested at reduced scale at Spain’s CIEMAT-PSA in Andalucia’s Tabernas desert. Now, the EU-funded Solwaris project is deploying the technologies at full-size at the 50MW La Africana CSP plant near Cordoba in southern Spain and there are plans for further testing in Israel.

If the technology proves to reduce water-use by 35 per cent for wet-cooled and 90 per cent for dry-cooled approaches, it could cut costs by some €500,000 a year.

Neom is a hugely glamorous project, a science-fiction city. But its solar-powered desalination plans also open an important opportunity to put smart new ideas into practice, at full-scale, and to build the evidence to enable the technology to benefit many other parts of the world.

Chris Sansom is professor of concentrating solar power at
Cranfield University. Contact him
at [email protected]