Global investment in renewable energy reached $ 288.9 billion in 2018, according to a press release published on the official UNEP website in June 2019.

Governments have begun to invest in projects seeking a cleaner future, and one of the most prominent may be the “NEOM” project in Saudi Arabia, which has a cost of $ 500 billion.

On January 29, 2020, NEOM announced that it will rely on pioneering solar energy technology to produce clean, low-cost, and environmentally friendly freshwater by signing an agreement with Solar Water Ltd., which is based in the United Kingdom.

The company is currently building “the first desalination plant with solar dome technology in the northwest of the country,” and is expected to be completed in mid-2021.

In an interview with CNN in Arabic, the CEO of Solar Water, David Reavley, said that the project is “a steel pot buried underground, covered with a dome. Therefore, it looks like a ball.”

The “heliostat” reflectors surrounding the glass dome focus the solar radiation around the dome. The heat is transferred to the seawater after it flows inland to evaporate and condense as freshwater.

Compared to the reverse osmosis technology that is used to desalinate water, Reavley said the solar dome technology is more environmentally friendly because it does not need to use polluting fibres that take 400 years to decompose. 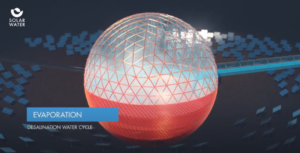 Reavley explained that this technology has the advantage of being able to build it faster and cheaper, in addition to being carbon neutral.

Regarding the provision of freshwater, Reavley pointed out that reliance on green technology is an important matter in the countries of the Gulf Cooperation Council and the Middle East due to the limited amount of rainfall and the lack of freshwater sources, such as lakes and rivers.

On the other hand, these areas also enjoy an abundance of natural resources, thanks to the water bodies that surround them, and sunlight that is available for about 10 hours a day, all of which can be used to provide better environmentally-friendly solutions.